If you have questions regarding writing extensions please post in Extension Writers Discussion to receive proper guidance from our staff and community.
Post Reply
12 posts

I'm not sure if I am in the right place, but I have some stuff I really want to get out in the open. This stuff is all based on complaints I have had from actual users to do with the basic way in which Phpbb functions. (Don't get me wrong, I like phpbb.) This is my beef:

Posting is too convoluted:

I'm really not sure why but Phpbb seems to regard 'quick reply' as being this really 'out there' concept.

Posting should be the absolute easiest thing to do on your forum. Making posting harder or take longer makes users less likely to post. Let me show you roughly what I think quick reply should look like. Please note that this is a very quick and rough photoshop job. The bbcode bar is real, however. I know this can be done because I've seen it several times: 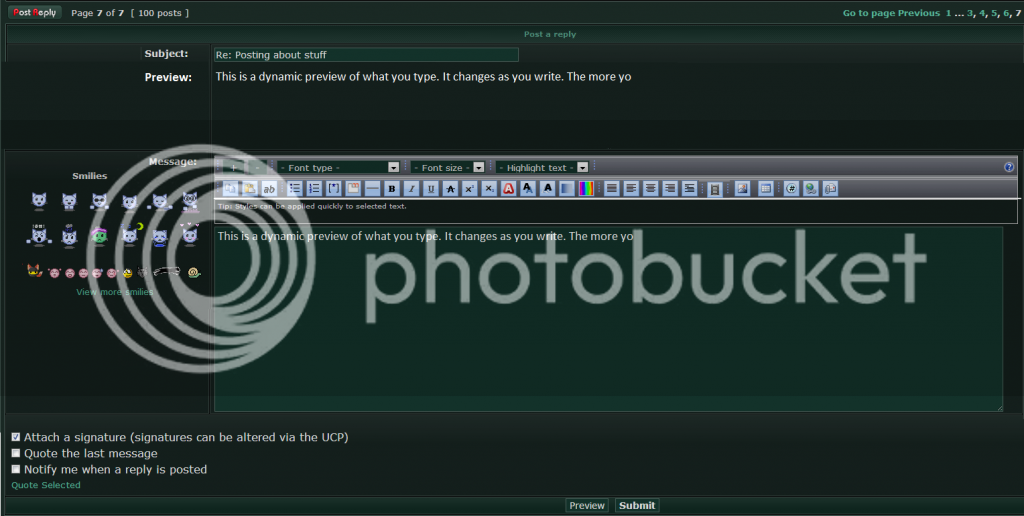 The user profile menu is a total mess:

Put simply, the number one complaint my users have about PHPBB is the brain-crushingly over-complicated and unfriendly interface.

Especially the user menu. It needs to have a clear out! Let me show you what the user profile section on my site looks like AFTER I deleted a couple of pages that did nothing but confuse people more. Categories have been expanded:

You'll notice that it is a total freaking maze for new users. And that is before you add mods. New users take one look at this mess and give up. The main problem is that every single one of these categories could be trimmed down to one or two pages. Setting it all up like this is totally unnecessary and only really works in the tabbed version of prosilver.

Suggestions:
The primary argument against these things is that it would make the profile pages denser and more complicated. But while it would make them longer it would reduce the frustrating clicking and searching that takes up most of the time you spend in the profile. By making everything clear and concise and trimming and merging all redundant options the menu can be made to be a much more friendly place. This goes for the admin control panel too. Which brings me to my final point. The index should do most of this stuff by default and should be completely modular.
Last edited by Dragonwolf on Sun Oct 27, 2013 10:48 pm, edited 1 time in total.
Top

You should avoid using ancient subsilver2 and subsilver2 based styles. Style you are using is one of those. All those elements look different in prosilver that is default style.
Formerly known as CyberAlien.

+1 to your ideas. I do think that the quick reply has to have the option like a regular reply and this may infact increase the overall user participation. Also if ajax posting is merged, it will be perfect and will save a lot of page redirections here and there just to complete a post reply process.

I also like your idea of changing the forum index page into a portal. When I looked at my statistics, I noticed that not a lot of people actually see the index page and the ones that do only stays there for like half a second since there isint much in it expect with links to various forum. Having it like a portal will remove the requirement to have a separate portal page and I think your idea is good. Although I didint like the style and the layout in that image, it is an idea that can be build on. I dont know if the developers will agree with it especially when its like a big change to the index page. Lets see....

Maybe each of these needs to be separate RFCs since they all are different feature requests.
Top

just posting this very simple message involved me clicking on the 'full editor button' to insert the bbcode and smilies and then pressing back so I could read your message properly. I really think that if Phpbb made quick-reply into a full editor with a dynamic preview there would be no need at all for the reply button. Pressing reply takes you away from the thread and it causes you to make mistakes. Quick reply encourages users while the full editor discourages them as it involves extra steps.

I know what you mean about the index. When I first replaced my index with a portal I got a huge positive response from my users because they finally felt like the index was part of the site! Having a portal-style index makes the users feel like they have logged on to their own private command centre. Having a separate portal page is worse since it puts up another barrier between the user and the 'submit post' button. I really don'e know why they are designed as separate pages when making them the index turns them into a huge upgrade.


I didint like the style and the layout in that image

I basically took a screenshot from a portal mod and turned it into an index page in paint. Basically it is what designers call a 'scamp'.

The actual page itself would be much much better, and because it would be modular you could change it about to suit your own tastes.


Maybe each of these needs to be separate RFCs since they all are different feature requests.

I think I will actually split the portal as index one, thanks for the imput!


You should avoid using ancient subsilver2 and subsilver2 based styles. Style you are using is one of those. All those elements look different in prosilver that is default style.

I am in the middle of changing over now, I just thought that showing the profile in subsilver would help emphasise what a total mess it is in there. :p Although, having said that, the moderator control panel is way worse by far. It's so bad in there that I really don't want to inflict its inner workings on other users. Or try to explain them.

Do NOT remove Bookmarks. I use them to see topics that are of specific interest to me (but I have subscribed to many more). I can then check my bookamrks to see if there are any new posts in those topics (even if I haven't subscribed). They are generally topics with useful tips in them that I want to be able to link others to in my posts.

I don't want to bookmark them in my browser because that just takes me to a specific page. I can't easily get to the first unread post using browser bookmarks.

Just because one person doesn't get the concept doesn't mean that they should be removed.

As for Quick Reply, I have no problem with a better Quick Reply box -- as long as the Admin can select turning it off as he can now.

I also disagree that posting should be the easiest thing to do. That's what spammers want.

Reading and searching should be the easiest things to do, followd by posting. I want people to read my board and, if they want to post, search for an existing topic first before posting. Remember that most boards have far more lurkers reading than people actively posting.

Steve
Silicon Valley Pocket PC (http://www.svpocketpc.com)
Creator of manage_bots and spoof_user (ask me)
Need hosting for a small forum with full cPanel & MySQL access? Contact me or PM me.
Top

just posting this very simple message involved me clicking on the 'full editor button' to insert the bbcode and smilies and then pressing back so I could read your message properly.

Ummm...there is this pretty big un-ignorable review window with the last few posts of the topic when you click on the Reply button and it displays the message as it was originally posted. If you went through all that trouble to reply to a topic then it seems to me that you're doing something wrong.

there is this pretty big un-ignorable review window with the last few posts of the topic when you click on the Reply button and it displays the message as it was originally posted.

I did mention this - it is backwards, inconvenient, and skips out the user's avatar panel. We really don't need the full reply box, it adds an extra step to posting and makes it harder to read posts, especially if you are dyslexic.


Do NOT remove Bookmarks. I use them to see topics that are of specific interest to me

0k, but normally something this obscure would be a mod. I find it very odd that Phpbb has a facility as advanced as this, but still has no proper fully-fledged quick reply.

Quick reply is one of the most basic parts of forum functionality, it is so much cleaner than Post Reply.
Top

Dragonwolf wrote:0k, but normally something this obscure would be a mod. I find it very odd that Phpbb has a facility as advanced as this, but still has no proper fully-fledged quick reply.

Quick reply is one of the most basic parts of forum functionality, it is so much cleaner than Post Reply.

We wouldn't remove bookmarks anyways. The functionality is already there. Really no reason to remove it.

As far as adding BBCode buttons and smileys to topics that is really an option the admin should have. Some will not care to have the full editor add load times to every single topic page. Others will take issue with that. Displaying the full editor in viewtopic.php doesn't really take a whole lot of code. It is about 20-30 lines of code (or less?) added to viewtopic.php but it really should be optional.

Well, obviously you could turn it off, but I think it should be on by default as it is in most other forums. Having no full quick reply was outdated back in phpbb 2, let alone phpbb 3. Finding a forum with no quick reply nowadays is rather like finding a website whose 'downloads' button sends you to a directory location instead of a html page.
Top
Post Reply
12 posts